As people become more dependent on technology, it is very important to remember that with technology comes pollution. It is time to use our brilliant minds to curb the pollution as we invent and develop eco-friendly ways to incorporate modern applications into today’s world.

One year ago the Bill & Melinda Gates Foundation presented a competition to the world; the “Reinvent the Toilet Challenge”.

The challenge was to invent a new toilet that could serve the billions who live without the modern sanitary comforts that most take for granted. Many scientists and inventors stepped up to take the challenge with their teams. 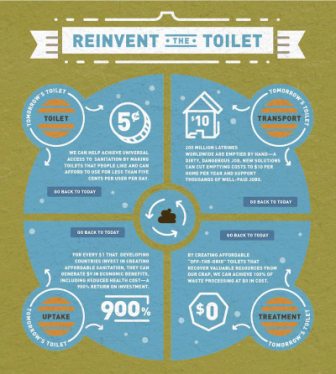 The challenge culminated this year in Seattle, Washington.

Unique projects using eco-friendly methods to develop ways to turn waste into usable matter were on display. The largest contest went beyond the actual invention. Added to the competition was the additional challenge of keeping the operating costs for the toilet down to five cents a day.

A self reliant toilet that works with no running water or electricity.

The toilets vying for the prize must not rely on running water ,electricity, or any sort of septic system. Instead of polluting the environment with waste, the toilets need to be eco-responsible by finding a way to turn waste into useful and clean resources to curb diseases in developing nations that have been caused by unsanitary conditions.

A last minute prize addition was added for “attractiveness”

The London School of Hygiene and Tropical Medicine used fly larvae to recycle waste into feed for animals at only one cents a day.

Hopes of eco and cost friendly toilets geared for underdeveloped nations are just the beginning.

Tons of potential drinking water is wasted each year with the flush of each toilet. More funding is to be provided to further develop the ultimate eco-friendly toilet. The final goal is “Toilet 2.0” with major testing to be in the plan by the year 2015.

Gates final goal is to reinvent the toilet for use not only in underdeveloped nations but to be ultimately designed to be used in developed countries as well.

Take a cue from the genius scientists; think outside of the box and never be afraid to dance!

Show me your support and subscribe to this blog, sign in under email subscription at the top of the column on the blog’s right side.

Subscribe and enjoy reading all of my articles under the titles of Interior Decorating, Long Island Interior Design,Decorating, Arts & Exhibits, Lifestyle, as well as General Pets, Fashion Trends, and Long Island Prepper written for Examiner.com.

One thought on “The winning toilet of tomorrow: Turning waste into want for the abode”